Quick note – This is a post that is similar in nature to the White Paper about linking Projects found here.

This is about the occasional need to link two (or more) schedules using Project 2010 stand-alone.  When using Project Server 2010 the syntax is slightly different and the white paper outlines how to do that.

This article explains how to link two projects without creating a Master Schedule and it demonstrates a small bug in Project and the correct syntax to use to create the link.

For this example, we have two schedules, named Project A1 and Project B2.  These projects look like this: 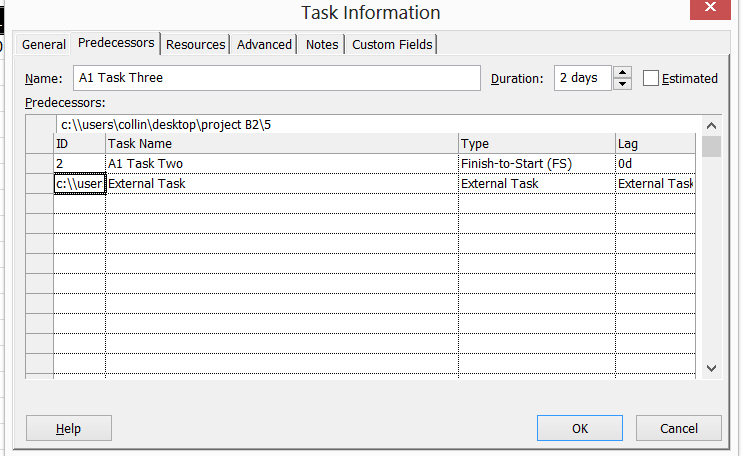 And, at this point, all looks well, but, when we click on OK – it is as if nothing happened at all (the predecessor column for A1 Task Three still has just the “2” in it):

And, that is the bug – entering the information in the Task Information box does NOT work.  It doesn’t give you an error message, it just doesn’t work.  The way around this bug is to put the link into the Entry Bar in the top of the screen.  Like this:

BUT, there is still an error – even though it appears that it worked in the previous screenshot:

And, that is because of the syntax.  When linking tasks, you must put the full path, including the “.mpp” for the project name.  When adding that and the ID after the “” it will work:

Since I have the “Show external…” and “Show Links..” checkboxes selected we now see those in Project A1 and Project B2:

One Response to “ Linking Projects / Tasks in Project Professional ”